It was a balmy evening in Seoul on Monday, May 17th, 2016. A stretch of high-rise buildings in the affluent Gangnam district lit up with countless lights and reined supreme over the fading twilight. And 20-somethings swarmed the streets of nightlife, perhaps with expectations of falling head-over-heels for an incredible romance. Indeed, two unlikely paths crossed that night, but the suspense of their intrigues ended in a horrifying tragic tale.

Surveillance-camera footage shows a 34-year-old man, shortly after midnight, identified only by his surname Kim, wandering about a four-story building near Gangnam Station. Kim, then, made his way up the staircase and waited uncompromisingly at the building’s gender inclusive bathroom.

Kim was an aspiring pastor but a seminary dropout. At first glance, it appears his reason was to construct an alternative to a prevailing reality. Because, early on, he was admitted to psychiatric hospital multiple times – on and off since 2008; he suffered from a severe form of schizophrenia – what by itself does not dispose people to violent acts.

Whether it was a callous disregard or a resolve to push himself to the limit, he stopped taking medications since discharged from the hospital in January 2016. He had run away from home in March of this year and found haven in the streets and bathrooms of Gangnam. At least, he seemed to inhabit an internal world that is not easily put into any category.

A 23-year-old woman and her friends were not prepared to call it a night, and instead, cheered on the idea of noraebang – a private karaoke room that is near-ubiquitous in Seoul. She and her friends located one almost effortlessly and headed toward it housed in the same building as Kim had occupied. Some time later, she excused herself to take a bathroom break. She didn’t return immediately. Then her friend began to wonder at her protracted absence and conveniently decided to check up on her.

There, she was found dead in the bathroom with multiple stab wounds.

Kim, with whom the victim allegedly had no prior contact, was apprehended the next day as a murder suspect. Behind his black-rimmed glasses, his stares looked disconcertingly cool. Kim confessed to killing her, because he had been “belittled by women” in the past.

Hundreds of people have gathered in outpouring of grief and prompted a wave of condolence Post-its covering the walls near Gangnam Station. For those who find themselves in intimate confrontation with such enormity of evil – especially like the one above, their desire for closure is understandable.

Interestingly, however, it has sparked a rallying cry against misogyny across South Korea.

Women have long struggled to rectify the gender imbalance and overcome restrictions on their aspirations. But social attitudes have caught up in the effort to reconcile the traditional role of women with contemporary convictions. And South Korea was of no exception to the women’s rising social status, including but not limited to: the push for workplace equality, the rise of female politicians, and the surge in divorce rates. Also, South Korea embraced its first female president Park Geun-hye in 2013.

It is unmistakably a gruesome tragedy, and the crime is so repulsive that the assumption may be almost automatic, provided Kim’s precise statement. But the public needs to dispassionately consider, from a carefully measured distance, whether the offender is either himself the byproduct of psychosis or more than the sum of his pathology – that is, a radical ideology.

Investigators tried to discover if there were some other precipitating events, but on May 22, they concluded that the murder was an isolated, random killing perpetrated by Kim’s a mental disease, and ruled on the possible hate crime as an untenable proposition. And perhaps they chose haste over analysis.

Under South Korea’s insanity defense, or not guilty by reason of insanity, it generally falls into these three (3) categories: did a defendant lack the ability to understand the wrongfulness of the act (“the M’Naghten rule”), or lack the ability to control an impulse in conformity with the law (“the irresistible impulse test”). Or, whether a defendant’s unlawful act was the product of mental disease or defect (“the Durham rule”).

According to the police, Kim waited approximately 40 minutes trawling for a woman in the bathroom. Furthermore, the police pointed out that Kim’s murdering the first woman that walked in was an indication that his crime was neither premeditated in advance nor systematic. But, it appears to be entirely opportunistic. Reflecting on the elapsed time, it is likely that patrons had gained access to the bathroom routinely. If that implication is carried to its logical end, then Kim may have deliberately avoided a physical confrontation with men who may put up a resistance. As a matter of law, it appears that Kim knew he was targeting a woman – a victim preference. And that’s knowledge.

In addition, it is entirely plausible that the instrumental backdrop and sound blasting out of the karaoke lounge may have drowned out the victim’s scream for help. Did Kim ever have a cool reflection on the idea of choosing this particular location? Furthermore, would Kim have committed the crime if a police officer had been present in the bathroom?

If he had appreciated the criminality of his conduct, then, by the prevailing legal standards, he is guilty. Notwithstanding whether a person is sane or insane, he has reasons for his action.

It is uncontested that Kim stabbed the woman to death. Nor is there dispute about what, regardless of the verdict, is to be Kim’s fate for the reasonably foreseeable future: he would be deprived of liberty – a mental hospital.

Kim’s brutal murder lies beyond the realm of human apprehension, but it does seem to point to a collective moral obligation, and the need of social initiatives aimed at persons caught up in the public mental health system, because the insane person is, after all, a person, a human being. 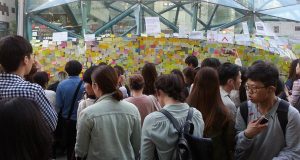