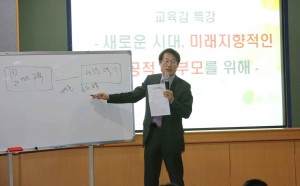 Cho Hee Yeon, superintendent of the Seoul Metropolitan Office of Education, was indicted on charges of violating the Public Official Election Act for making a false accusation against his rival candidate ahead of a local election last year. He was found guilty and fined 5 million Won at the trial on April 23.

The court said in its ruling that publicly questioning an individual’s character or background without enough grounds could defame someone’s reputation as well as mislead the voters and be against public interests.

Cho said he was disappointed by the District Court’s ruling and that he’ll appeal and continue to prove his innocence.

In the 2014 election, rumours spread rapidly from a Twitter posting that Ko Seong Duk, (Cho’s opposing candidate) possessed U.S. permanent residency for him and his children. Cho’s camp decided that it would be very valuable information for the voters so Cho officially asked Ko to respond to the rumour.

Several conservative groups filed a complaint against Cho for making a false accusation against Ko. The police investigated and declined to bring charges against Cho. The prosecution proceeded with an indictment against Cho, one day before a statute of limitations.

“This case was already over,” Cho said. “The Seoul Board of Elections cautioned us about slandering the opposing candidates during the election campaign. The police investigation came out with no suspension and we moved on. It’s surprising that I was indicted now,” He said.

“It’s very common to ask opposing candidates to explain about doubts that arise during an election campaign,” Cho said. “The freedom of speech and expression should be assured. Voters have a right to know about their candidates. Helping them to make the right decision during the candidate verification process is necessary and it shouldn’t be limited in the democratic electoral system.”

The opposing candidate Ko Seong Duk also raised questions about Cho suggesting that Cho’s son tried to avoid military service; and that Cho was involved in The Unified Progressive Party (UPP), a recently banned leftist political party, accusing him without evidence, of Pro-North Korea sympathies. Ko was never punished. Therefore Cho’s supporters have criticized the indictment as an “abuse of the prosecutorial power” and a “politically targeted indictment.”

Cho Hee Yeon, a long time educator, was elected based on promises that he would change the troubled Korean public education system and reform schools. He has come into conflict with the ministry of education and conservative education groups over a number of issues: closing of unqualified independent private high schools; contributions to a universal childcare; and rehiring of unfairly fired teachers.

Cho said he hopes that freedom of expression and speech won’t be impacted by the court’s decision and that he plans to push forward educational innovation policies after the verdict. His supporters said the court’s decision is outrageous and Cho shouldn’t be stripped of his post for expressing his opinion for the voter’s best interest.

139 Civic groups prepared a petition for his acquittal.