On September 6, 2014 about 100 members from a South Korean conservative extremist online group called ‘Ilbe’ came to Gwanghwamun Plaza where the families of the victims from the Sewol have been camping out demanding a special bill to be enacted for an independant and thorough investigation into the Sewol disaster. In the deadly sinking of the ferry Sewol over 300 passengers, mostly high school students from a working class neighborhood, were killed after being trapped inside of the capsized ship on April 16, 2014.

The families and their supporters have been on a hunger strike demanding for an enactment of the special bill to establish a special investigation committee to investigate anybody and to indict anyone who is found responsible. The members of this conservative extremist group announced that they would have an event of “an excessive eating strike” to oppose the bereaved families’ wishes.

Within less than 200 meters from the tent where the families of the victims were staying on the plaza this group of people sat and gorged on a large amount of food including fried chicken and pizza in order to ridicule the families and their supporters.

One business man in his 50s who did not want to give away his name ordered 100 pizzas for these people, saying that he would like to show support for the people from this conservative extremist group because this group continues playing the role of the center for this country. He also said that the families of the victims from the Sewol disaster did have a certain political intention to harm the country, by creating a division in the public. However, the responses from the public were rather negative. A lot of the onlookers were very upset by the way these conservative extremists were acting towards the families of the victims. They said that the families only wished to uncover the truth behind the deaths of their loved ones and that these wishes should be respected and realized. No one should be so inhumane and unsympathetic towards their fellow human beings’ suffering. Adding that this should concern everyone because no one would want to see anything like this reoccur in the future.

Meanwhile, the members of the ‘Ilbe’ have left behind huge piles of garbage on the plaza when they finished their “excessive eating strike” in about half an hour. 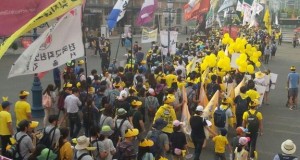