April 26, 2014 – Perhaps what bothers families of the passengers and the public most about the sinking of the ferry Sewol may be this: Why the initial rescue operation by the authorities was so painfully slow and seemed even reluctant? With the best technology and trained personnel in the coast guard not a single person has been rescued from the sunken ferry. Didn’t the rescuers work hard enough? And why on earth did they refuse the volunteered help offered to them both at home and abroad?

According to the South Korean government, about 200 ships, 34 aircraft and 600 divers have been taking part in the search operation. The families and volunteers at the site give a different account. Only a handful of divers have reportedly been working for the rescue operation and this has been rather sporadic.

On Monday Lee Jong-In, CEO of Alpha Diving Technologies, Ltd., a private marine rescue and salvage company, brought his own equipment including a diving bell at his own expense to Jindo, where families of the missing passengers were desperately waiting for any news about their loved ones. Lee, who is an expert in rescue and salvage operations with over 30 years of experience in the field, had been saying from the beginning of the rescue operation that a diving bell was required to extend the diving time. With the aid of a diving bell, divers would have been able to work for up to 1 hour 20 minutes at a time, allowing a total of about 20 hours for a thorough rescue operation at a crucial time. Divers from the coast guard have been able to work in the water, for just 10-15 minutes at a time.

However, when Lee arrived with his equipment at the port he was not allowed to work. He was told by government officials that it was not safe to bring and utilize his equipment due to the already established power and communication lines in the water. Lee was tearful when leaving the site.

Now on this video the families of the missing passengers are pleading with Lee to come back and help rescue possible survivors or recover bodies. With much pressure from the families and the public, the government has finally agreed to let him work in the sunken ferry. Lee is scheduled to start his operation on April 25th.

I’ll put you on the phone.
Speak!
Say something, quickly!
We must collaborate, let’s work together…
Stop saying such nonsense!
Well, in any case, I’ll bring all my equipment and put my best effort into trying to resolve this. We will discuss details..

Let me speak on the phone.

Please tell him to hurry!

I apologize for calling so suddenly. This is being broadcast live, and the missing people’s families are all listening.
The equipment, you said, is currently near Mokpo. When will you be able to bring it? If you leave right away.

Can you come any sooner?

Well, why didn’t you let me do the work when I was there?

Those bastards didn’t want it then!

Back then the coast guard kicked him off, telling him that the families did not want his help.

No, that is not true! 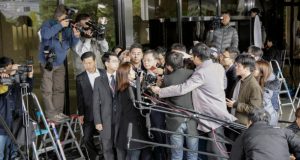 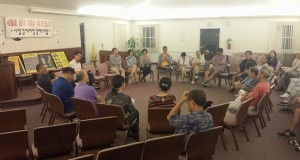